I Went To Church On Sunday (sort of!)


It’s been years since I’ve stepped foot in a church, but last Sunday, I went to church. 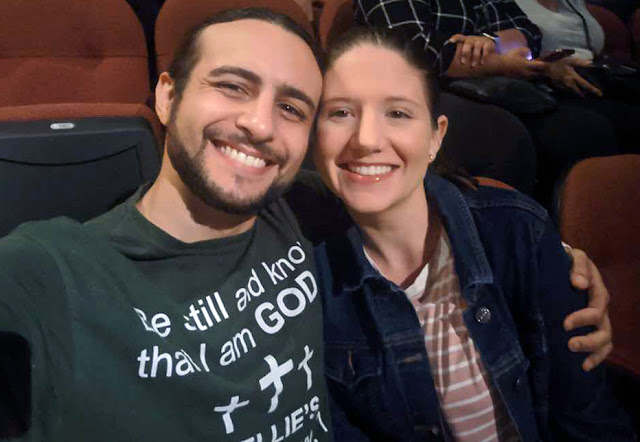 Alright, well, it wasn’t actually a church, but The Forum in Los Angeles. And it wasn’t your typical Catholic Service, but Kanye West’s Sunday Service to celebrate the new "Jesus Is King" album. And if you know me, you know Ye is one of my all time favorite artists. 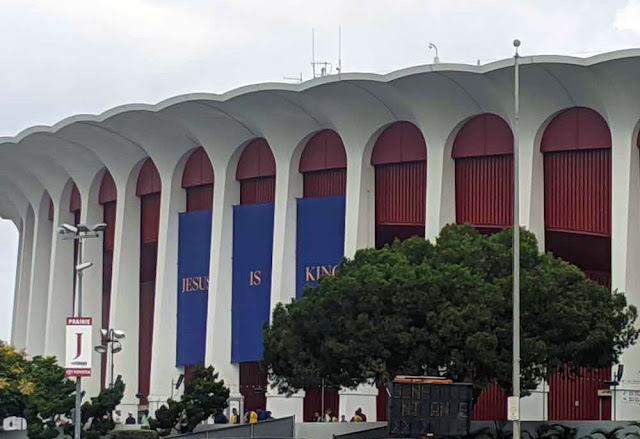 The area surrounding the stage was made up of tall grasses and flowers, giving it a natural feel. Outdoorsy sounds like twittering birds played over the speakers as people filed into the venue and found their seats. Many were wearing Kanye merch, some were in Golf apparel, but a few were all gussied up just like for church.

The show started with a crowd of white-clothed performers, led by Kanye and North West, taking to the stage. They began with “Closed On Sunday” from his new album, which was fitting for the event because it references the same Sunday Service we were attending. For some background, Kanye has been hosting a Sunday Service frequently in secret venues for the elite and invited. He also hosted on on Easter Sunday at Coachella (which made me insanely jealous at the time).

Each choir member had their own mic headset, which filled the venue with angelic voices. The choir was led by Jason White, who provided inspirational messages to segue between songs. It was my first experience with Jason, and a great one. At one point, he said God always shows you the way. When you can go left or right, or you feel stuck, God will tell you what to do. I thought that was beautiful.

Dillon Francis also made an appearance on the piano. That was followed by Clipse for his verse on “Use This Gospel,” as well as the legendary Kenny G and his saxophone. The crowd went wild for Kenny.

A pastor did take the mic for about five minutes, discussing John 3:16. While it wasn’t quite my cup of tea, a few audience members were feeling it, and I was able to resonate with it in my own way.

“Father Stretch My Hands,” “Ultralight Beam,” and “Fade” from Kanye’s previous album, “The Life Of Pablo,” were also performed. It was so amazing to hear those songs in a gospel setting, with dozens of voices coming together; it gave me goosebumps.

We even heard North say “hello,” and I’m convinced she grabbed a mic to do so on her own. It was so adorable.

It was so much fun to let go and dance to the beat, even though we were the few in our section vibing to the music. I felt silly because of this, but I channeled my inner Kanye and went all out.

We had to leave a bit early so I could see my sister perform in Long Beach (shout out to Leanne and Fem Body Fitness), but we left dancing the entire way out during a lively session of Jamaican music.

All in all, it was an otherworldly experience. I’m still in awe we went, considering we bought the tickets for $10 the day before. I’ll cherish my time at Sunday Service for a lifetime. Thank you to the King and Kanye West.

To watch the entire Sunday Service at The Forum on 10/27/19, view the live stream recap here.

Popular posts from this blog

April 19, 2019
This weekend, I begin an eight week journey to become yoga teacher certified. I hope to become healthier, wiser and more level headed after this experience. Beyond that, I hope to introduce yoga to those who may not know about the practice but can benefit from its healing aspects, including my friends and family! (Hi, mom)!

Going into it, I have no idea what to expect. I know I will be taking more yoga classes than I ever have before—five per weekend—but I'm up to that challenge. I already listen to my body quite well now, and don't expect to be pushed beyond my limits in the practice aspect. What I'm unsure about is the actual learning I'll take part in; will I find out how to guide others, or will I have to figure that one out on my own? Our teacher, Robbin, mentioned we will go over the necessities to teaching such as voice training. It hadn't even crossed my mind all the aspects that go into teaching a class!
I'm not doing this to change career paths, for t…
2 comments
Read more

I Am Officially A Yoga Teacher!

July 10, 2019
It finally happened! A little background, instruction took place at Sweatstar Yoga's two studios in Laguna Niguel and Rancho Santa Margarita, California. The wonderful Robbin Rubio guided 14 of us through eight weekends full of laughter, tears, and soul-searching work. If we wanted to become successful yoga teachers, we had to look inward and heal ourselves. As Robbin pointed out, you could fake it for a little bit, but only transformed people transform people.
And, like my classmates, I am transformed.
It was beautiful to see how different each of us were from the first weekend. The heartbroken survivor became the strong, independent light of energy. The overworked parent found the path to freedom. The office executive tried more new experiences than ever thought possible. And me, the young woman looking for guidance found it in the arms of her new tribe.
It took me a while to write this post. It would be easy to say I'm not sure why, but the truth is I didn't want to believ…
2 comments
Read more

Check In On My Journey

May 05, 2019
I have now finished the third weekend of my yoga teacher training and I feel like a brand new person. More accurately, though, I feel like I am reaching my full potential. Of course, I have a long ways to go. Recognizing that journey is the first step.

What We Do I am going to describe our first few weekends; we take part in five hot yoga sessions per weekend, with one on Friday evening, two on Saturday and two on Sunday. We then have class time, which will usually include teaching by our instructor, the wonderful Robbin, or a guest instructor. Our first night together, we sat in a circle in a room and introduced ourselves and told our story about how we decided to do yoga teacher training. (More on that below on My Journey To The Mat). That same night, we brought our mats into a circle and had to sit knee to knee with a partner. Robbin would shout out a topic, such as "describe your life growing up," "describe the most intense moment of love you've felt" and &q…
Post a Comment
Read more